The Savannah is the most expensive cat breed in the world, because breeding these cats is very hard.

Crossing a serval with a domesticated cat to get F1 kittens is difficult because:

But also breeding high generation Savannahs to get F2 or F3 Kittens is very difficult.

Premature kittens could be rejected by their mother and if so, you will need to give the kittens milk by bottle every 1-2 hours. Day and night. And if the mother does nurture her kittens, you still need to check their health at least once a day. Kittens who drink mothermilk but do not gain enough weight, will need extra milk from a bottle as well.

Up from breeding F4 Kittens, it is usually normal like breeding regular cats. But, to breed them, you will need a Savannah female who is the result of a difficult breeding process. So that is why F4 and F5 Savannahs also do not come cheap. 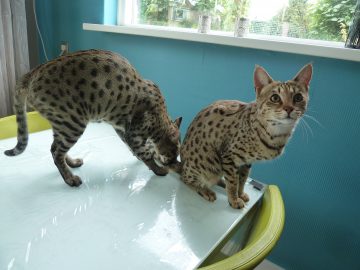 The breeder has to deal with family trees, blood lines, desirable breed characteristics according to TICA, genetics and the health of both male and female. With each Savannah the breeder takes a gamble because not every Savannah, be it male or female, is fertile.

Breeding Savannahs costs a lot of money and takes a lot of time; it is therefore an expensive hobby. If you want to breed Savannah cats to gain money, keep on dreaming. The cats are expensive to buy, have lots of veterinarian costs and eat expensive fresh meat. You need to build heated enslosures for them, replace destroyed cat toys on regular basis etcetera. Kittens can die easily and may need veterinarian checks often.

The socialization process of the cats and kittens is super important with Savannahs, and that takes a lot of time and effort from the breeder. But as a result you will have a beautiful lovely pet. Unfortunately there are still many breeders who do not socialize their cats well, what results in wild animals who are not suitable as pets and give the Savannah cat breed an undeserved wild and dangerous image.

The personal life of the breeder is also affected. When you breed Savannah cats, you have to be really dedicated to it. You cannot leave the cats for a couple of weeks to go on a holiday with your family. It is not easy to find a replacement care taker to look after the cats. Some of them might be pregnant or have kittens and a care taker will need to know exactly what to do.  To keep the cattery and other spaces where the Savannahs live clean, requires a lot of cleaning.

Of course, there are sad things that are part of beging a cat breeder. Kittens who are still-born, a mothercat with complications during labour, sleepless nights to give an abandoned kitten milk, and after a couple of weeks it still dies, you name it.

But let us not forget the amazing aspects of breeding Savannahs! When, after many times of trying, you get your first litter of beautiful kittens! The remarkable magic of pregnancy and birth. The surprise of how many kittens will come out this time. The mother cat who trusts you when having labour. Playful happy kittens who run around the house. That is why we do it! 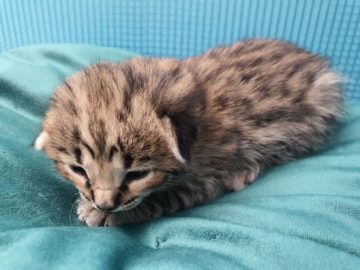